Did you know that with statistical taxi fuel you can both achieve savings and increase safety?

Statistical taxi fuel is a method of calculating fuel for a taxi phase in the most precise and fuel-efficient way. It is done by analyzing historical fuel burn during taxi-out for a particular route, runway, aircraft type, season, or even time of the day. Then planned taxi fuel is calculated using appropriate safety level, for example, 95th percentile of taxi fuel burned on those flights. By using this method, we can positively influence two important aspects: fuel savings and safety.

Usually, airlines do not have the most precise guidelines based on the real fuel burn of each flight. As a result, Flight Planning System might add to the taxi phase more fuel than it results from the real consumption of the aircraft. For example, the Flight Planning System plans 320 kg of fuel for the taxi phase, where real average consumption is 150 kg, and the 95th percentile is 220kg. 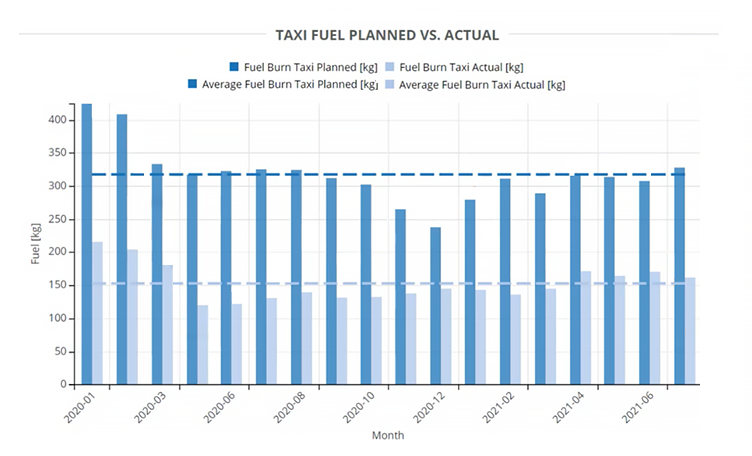 It results in a fuel penalty because the aircraft weighs more than needed and therefore burns more fuel. To calculate how much fuel we lose on each flight we need to calculate the difference in weight and multiply it by the cost of weight. In this particular situation, it is an average of 100 kg of unnecessary fuel weight, which for medium-range aircraft is approximately 5 kg more fuel burned on its route.

Using statistical methods is especially important during COVID period, when air traffic is limited. As a result, taxi is shorter, which means that the actual fuel consumption of a taxi fuel can be reduced by half. It is shown on the graph below. 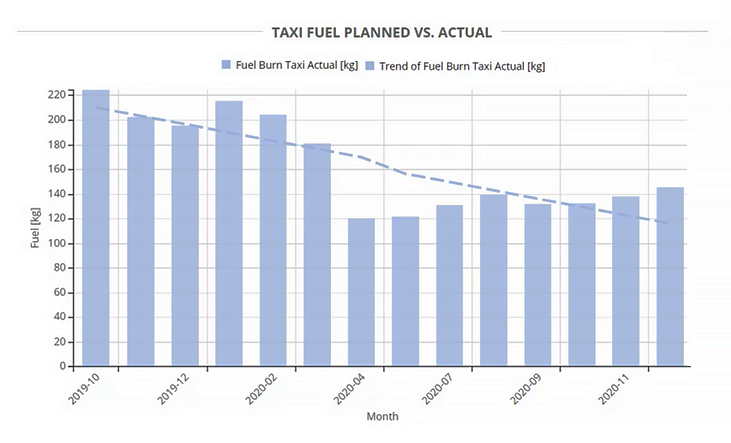 When using Statistical taxi fuel, it would automatically adjust its value to the fuel burned in the latest flights, thus providing savings.

There might also be an opposite situation when the actual taxi fuel is higher than the planned one, which obviously impacts the safety. For example, 300 kg is planned for the taxi phase at airport X, and in fact, aircraft burn 400 kg or even more. This means that the fuel for a taxi phase in such a situation is used from the reserve fuel. Especially when we plan very precisely the amount of fuel for other flight phases.

In addition, the pilot which saw that the aircraft burned more fuel on a taxi than was planned will lose confidence in the accuracy of the Flight Planning, then can take a larger amount of extra fuel for the next flights, which will make the aircraft heavier and will generate fuel losses. The vicious circle.

The chart below shows the number of flights (on the vertical axis) and the difference in kilograms between the fuel used and the planned fuel (horizontal axis). As you can see, in the majority of the cases aircraft burns less fuel than planned, however, there are still a lot of situations where it burns more fuel than planned (marked in red). 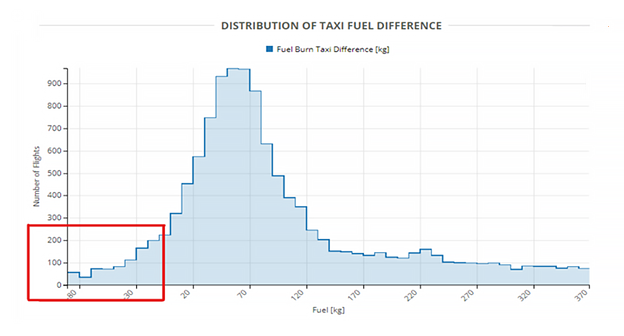 With FuelPro, it is possible to generate output for the Flight Planning System, which allows having the most accurate taxi fuel data for each flight, leading to fuel savings and to increased safety of your operations.

StorkJet’s Tips #5 – How to reduce your engine maintenance cost with thrust reduction?

Take off and climb can be performed with full or reduced thrust. Let’s think about the consequences of using […]

We are breaking stereotypes about single engine taxi

Is it true that single-engine taxi always gives significant savings? How can we prove or deny it?Target only areas that bring real […]

Our mission is to accelerate the transition of aviation, to be more efficient and sustainable, by using technologies based on […]