FuelPro is the fuel & operational efficiency platform that enables analysis and implementation of all cost savings initiatives (up to 4% of savings), by utilizing aircraft flight data. Today, FuelPro supports the efficient operations of 176 aircraft from 3 airlines (JetSMART, Volaris, and LOT Polish Airlines).

In the article, besides the details about the FuelPro concept, you will also find the story of JetSmart’s battle for the best fuel efficiency. From identification of challenges, through the decision to become a FuelPro user and the summary of cooperation expressed in fuel and money saved.

Link to the full release of Aircraft IT Magazine 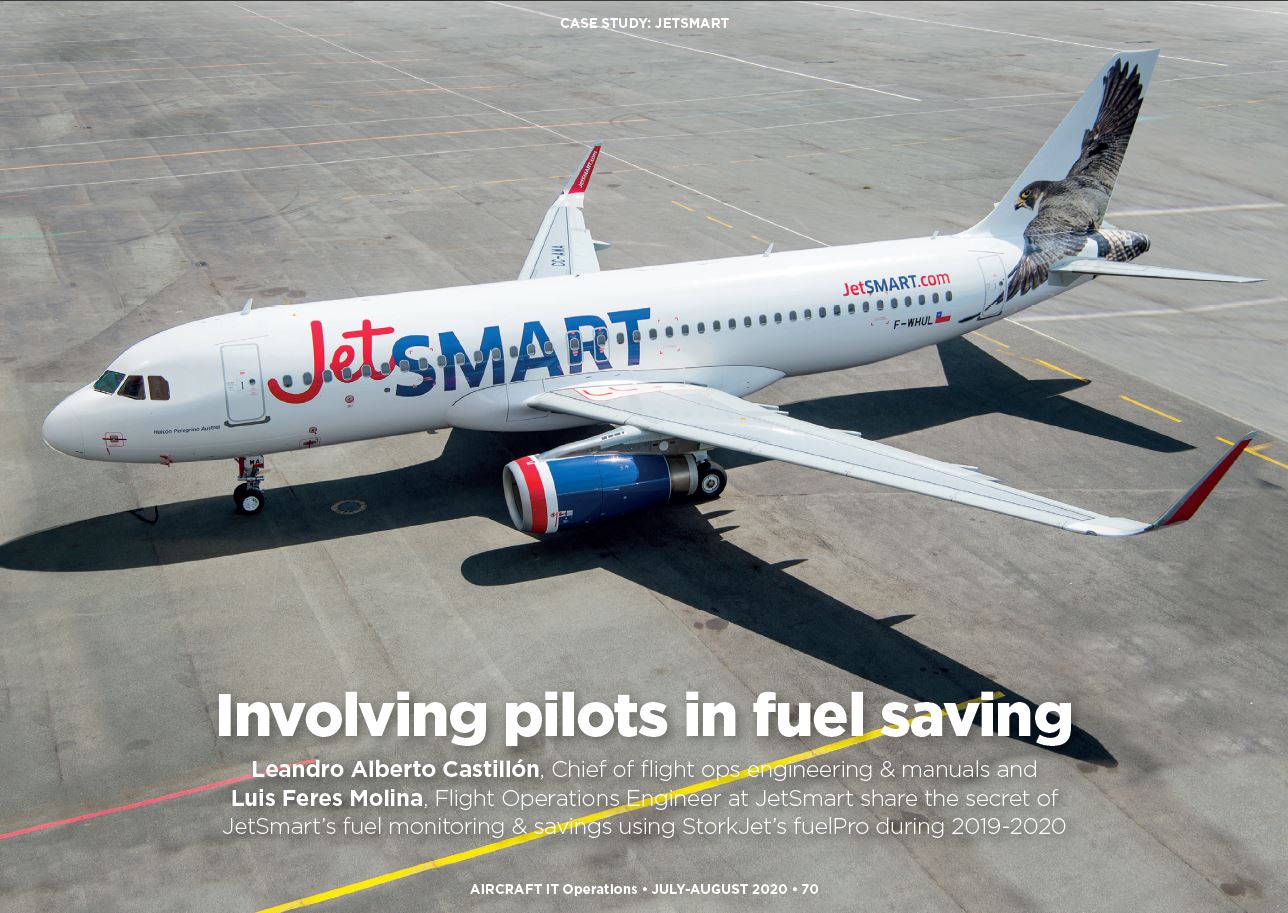 Founded in 2017, JetSmart is a South American ultra-low-cost aircraft operator, mainly serving Chile, Argentina, Perú, Colombia, and Brazil. Its primary operations bases are Arturo Merino Benitez International Airport in Santiago de Chile, and El Palomar in Buenos Aires, Argentina. Currently, with a fleet of seventeen aircraft, JetSmart has a very ambitious growth plan, aiming to have a hundred aircraft fleet by 2028. JetSmart’s goal is to become the major ultra-low-cost carrier in the region. Today’s very competitive airline environment means that lower costs are the key to success. In 2018 we started to look for new solutions to improve cost-saving initiatives in JetSmart’s daily operations. Fuel represents our major cost and so we focused on its optimization. Tracking and control of fuel-saving initiatives is an essential tool for airlines to reduce total fuel consumption through effective company fuel policies in all flight stages. Having a modern and robust tool to keep track of all initiatives on an easy-to-understand and easy-to-update basis was a must-have for us. With these two premises, we started the search for a holistic solution. During this search, we were contacted by StorkJet, whose expertise is in flight data analysis and fuel efficiency. As a result of that contact, in 2019 we started the implementation of FuelPro, a powerful web-based platform that allowed us to obtain monthly reports for each fuel efficiency initiative.

The challenge and the way forward

At the beginning of the project, JetSmart had a set of initiatives that covered the basic aspects of flight operations. As operations grew, we were facing more and more difficulties in keeping the data up to date. A lot of time was spent generating the data instead of analyzing it and these time-consuming efforts were becoming a challenge to us. With very fast growth planned for the near future, we were worried about how to overcome this issue. That was when the easy method for uploading data into StorkJet’s FuelPro really optimized our manpower usage. We are responsible for getting the raw data and uploading it to StorkJet’s server. Once uploaded, the StorkJet team consolidates all the different reports into a single database where all the information is available. Also, they do the required validations to ensure the quality levels are met. This process ends with new data added to the platform giving us a full set of graphics and tables to analyze our fuel initiative program. The task of getting raw data is easy to automate, meaning we are now able to dedicate more time to the analysis of the data instead of generating the set. Also, with FuelPro capacity, we can get KPIs that otherwise would not be possible to obtain. One good example is the cruise speed KPI that allows us to monitor fleet adherence to the company’s cruise speed policy.
Thanks to StorkJet’s FuelPro we were able to considerably increase adherence to the company’s cruise speed policy and generate important efficiencies in terms of fuel consumption and CO2 reduction.„

The other big challenge we had was communication. Pilots and dispatchers are the key players in any fuel efficiency program. Without their commitment, it is impossible to have a good efficiency program. This was addressed using the web-based portal, which each JetSMART pilot can access from their own home, to check their performance. StorkJet’s FuelPro allows pilots to understand their own weak and strong points; thus, promoting continuous improvement in the operation. At last, fuel efficiency is not a static matter. New fuel efficiency initiatives show up in FuelPro and must be considered.
During the time we have been using this tool several improvements and new initiatives were added to the platform, reflecting a strong aspect of the system, its flexibility. Adding new features in a very short time allows JetSmart to stay updated in terms of new initiatives.

FuelPro is a multi-variable fuel platform for the analysis and tracking of cost-saving fuel initiatives, in all flight stages; fuel policy, flight planning, ground operations, APU & packs, departure, flight speed & vertical profile optimization, and arrival (see figure 1). Using FuelPro, we can easily see fuel statistics for each section, mean values ​​for fuel consumption, compliance percentages for each initiative over any period, airport, runway, bases, fleet, aircraft types, and individual pilot’s scores. Additionally, we can set targets for each initiative and see if they are fulfilled by our crew and technicians.
All this data has been of great value for JetSmart’s procedures, company fuel policies, fuel tracking reports and always being aware of and ready to act on the status of fuel-saving initiatives for our company.

The FuelPro data tracking system shows the percentage of data that has been recovered monthly for each tail. As we can see in figure 2, the overall retrieval rates for Operational Flight Plans (OFP), Quick Access Recorder (QAR), and Load-sheets (LDS) are over 90% for JetSmart’s fleet. When gaps occur, we can download an Excel file with the group of flights with missing information, which allows us to request our team (maintenance, engineering, flight ops.) To recover that data in a faster way.

Fuel saving comes as a result of a combination of several initiatives, for instance: when conditions and safety allow it, using one engine during taxi; flaps in the lower configuration, and an adequate acceleration height will result in less fuel consumption during the departure configuration. FuelPro includes an integrated characteristic to visualize the best configuration (see figure 3) for all runways and intersections operated by JetSmart. This is useful to determine where potential fuel savings could be found and establish new fuel policies to advise our crew members in daily operations. For example, using FuelPro we found out that in Santiago airport, the best departure configuration offers savings between 21 and 28 kg, thus offering a potential saving of 28 kg per flight, for 3000 flights, a fuel price of 0.5 US dollars / l.

StorkJet’s FuelPro offers JetSmart an excellent dashboard to see the potential for savings during the year. As we can see in figure 4, on the left axis are the monthly savings and on the right axis is the percentage compliance for all JetSmart initiatives. As compliance increases, also fuel saving increases: the highest compliance was reached in September 2019 with saving for our company of $ 30,359 US. Annual fuel savings for JetSmart due to fuel efficiency practices were $ 287,737 US. Since the beginning of 2019, the monthly savings doubled – from around $ 15,000 to $ 30,000 monthly. Recently, new initiatives have been added to FuelPro, which could considerably improve fuel savings in 2020.

Pilots can easily access to FuelPro platform using their corporate email and password, each of them has an associated ID and name, so they can see their performance monthly results in a website interface. They can also compare their fuel performance scores with the previous month and with other pilots (see Figure 5).

In the words of Johannes Akel – First Officer, who has been regularly using StorkJet’s FuelPro, “FuelPro displays the results of each pilot in a friendly way which allows them to quickly view the status of the general results. By comparing your information with that of other pilots, you can quickly visualize and understand whether compliance with savings policies is above or below average. „

JetSMART recommends FuelPro for airlines seeking to reduce their fuel consumption. It covers essential fuel-saving initiatives and has helped JetSmart to upgrade their fuel procedures, control, and savings. Also, StorkJet technical support is always available to solve any issue or question as fast as they can.

JetSMART is a Chilean low-cost airline based in Santiago, Chile. From its hub at Santiago International Airport. JetSMART flies to eight international destinations within Argentina, Brazil, and Peru and 10 domestic destinations with a fleet of 17 aircraft from the Airbus A320 family. A further 75 aircraft from the A320 family are on order for delivery over the next few years.

We are breaking stereotypes about single engine taxi

In the video below, we will show you how we calculate the saving potential, so you know the true […]