Leszek Danielski, Flight Operations Engineer at LOT Polish Airlines, shares how the airline leveraged efficiencies because of the improvement in aircraft performance monitoring.

Article is published in  AircraftIt magazine 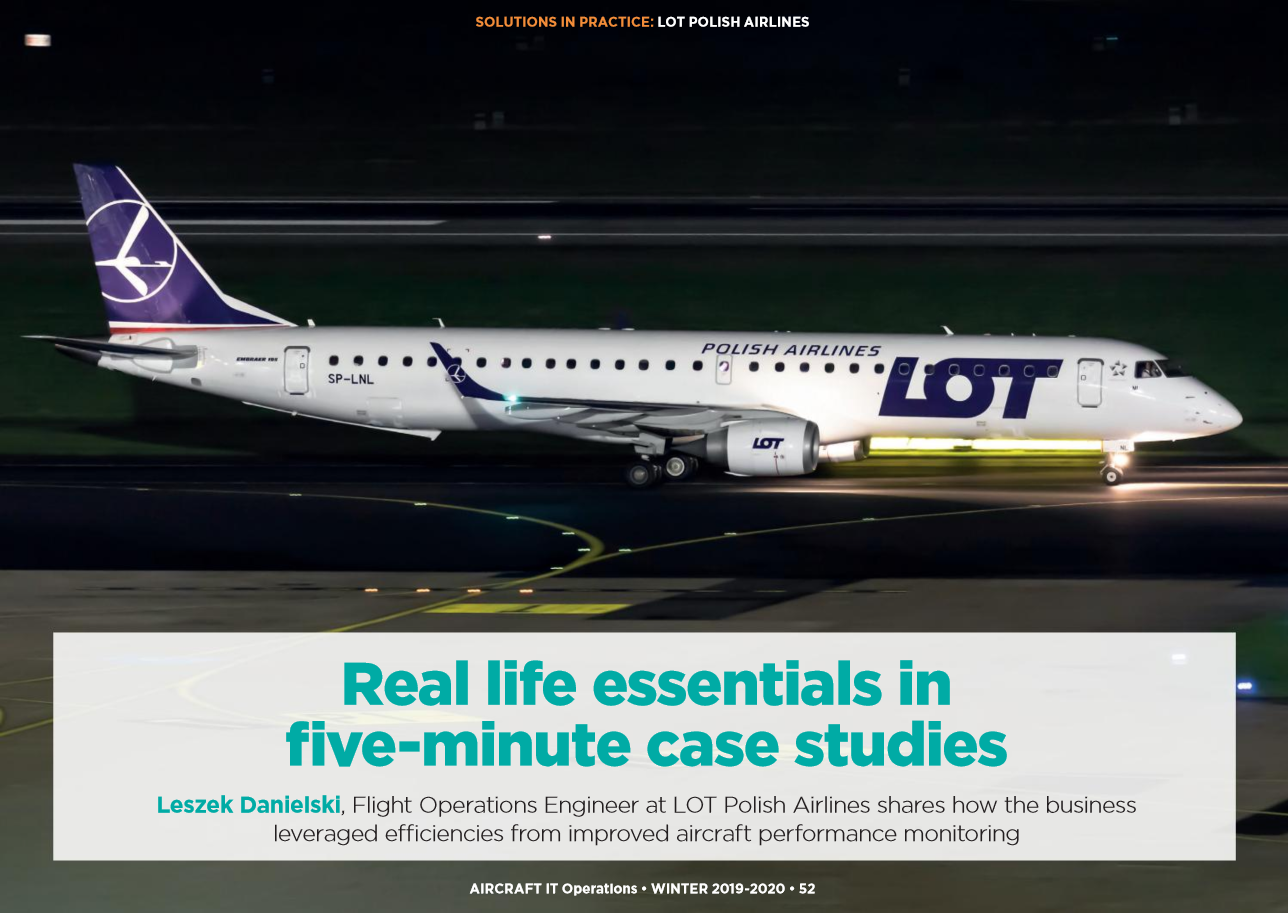 About LOT Polish Airlines fleet
Before we consider the value that was realized from implementing an advanced aircraft performance monitoring solution to keep track of performance in LOT Polish Airlines’ fleet, I’ll first tell readers about that fleet.
There are 90 aircraft in the LOT fleet with 11 different airframe / engine combinations from three aircraft manufacturers. Both jets and turboprops are operated. In terms of age it is one of the youngest fleets in Europe.

Aircraft Performance Monitoring (APM)
The term Aircraft Performance Monitoring (APM) refers to a number of processes. It includes in-flight recording of parameters related to aircraft performance and comparison of recorded data with results obtained from performance databases provided by the aircraft manufacturer (base or 'book’ performance). APM also involves tracking, over time, changes in these comparisons and using that information to more accurately plan required fuel quantities and to assess the technical condition of the aircraft.

Benefits of using the APM system
APM supports the accurate determination of degradation factors that affect the aircraft relative to baseline performance. It also allows the realization of planned fuel quantities calculated by the flight planning system and the on-board computer (FMC). Using APM helps with tracking trends in aircraft wear and tear, the identification of better and worse aircraft in a given fleet and appropriate matching of aircraft to the routes to be served. It helps with categorizing tails to be maintained, supports a reduction in regulatory fuel reserves and increases crew confidence in the flight plan, thereby reducing fuel top-ups and / or contingency fuel uploads.

APM at LOT before Storkjet AdvancedAPM
With the number of manufacturers, types and models of aircraft in the fleet, the processes involved in the operation of the APM system at LOT Polish Airlines used to be very complex and resource hungry. Data feed was coming from a variety of sources like ACARS / QAR / FDR and, in some cases, supported with OCC data, LDS, EHM and AOM because of aircraft avionics limitations. APM software was from aircraft manufacturers, supported with in house developed solutions. In each case data pre-processing was required to meet APM software input requirements.

Issues and inconveniences
There were a number of issues and inconveniences from APM related processes. Data transmission was via ACARS and that generated costs plus, in some cases, APM Software is subject to a fee. Also, DSIRF extraction from FDR is not an obvious process, additional effort is required. Another challenge was diversity in the IT technology used. If we introduced a second-hand aircraft to the fleet, it might require ACMS / DFDAU reconfiguration, and there was a cost involved with that. Aircraft avionics software is not free from errors and that may prevent the automatic collection of data plus there was a high labor and time demand where the in-house solution was in use.

Finding a new APM solution
Being aware of the imperfections of the existing solution, we have been monitoring the aircraft IT market, looking for replacement that would allow LOT to move the center of gravity from data collection to data analysis. Surprisingly the offering was rather poor and available solutions appeared to be more or less what we already had in house … and that’s when the StorkJet flyer came into our hands.

Implementation
From the perspective of LOT, this was a major change consisting in transition from ACMS based APM to FDR based aAPM (advancedAPM). The airline had to provide source data of proper quality and all the rest of the implementation was done by Storkjet.

One of the objectives of the project was to have an aircraft performance history in the system at least one year back from the start date. This required the preparation of a huge amount of data, including historical data. On this occasion such imperfections in the data as lack of data, their discontinuity or inconsistency manifested themselves.

The source data is processed internally for various other systems before being sent to advancedAPM. The challenge has been to ensure that the right data is in the right place at the right time. This was the most difficult part of the project.

The above process had to be done for each of 11 different airframe / engine combinations and in some cases it had to be repeated due to source data problems. It was the largest part of the project.

Storkjet made the acceptance environment available already during the project, so it was possible to see how new planes and new data appeared in real time. At the same time, we had the opportunity to comment on the user interface and submit proposals for changes. The environment is fully customizable.

Anyone who has previously dealt with APM can easily learn this new environment and appreciate the ease of use. Therefore, no extensive documentation is required.

New planes are added automatically as soon as the source data for them is available. At the same time, it is still possible to raise system improvements, which are implemented in new releases of the working environment.

A big advantage is the ability to eliminate the cost of data transmission by ACARS by using the existing data collection process for the needs of FDM or direct reading of parameters from files recorded on QAR / DAR. The last option bypasses the limitations of the standard performance monitoring process, such as a significantly limited number of stable sections or the calculation of performance for the cruise phase only. Thanks to this, the precision of the above mentioned indicators is much higher than with the use of standard methods.
The process is fully automated, the performance team to concentrate on allowing analyzing the results and implementing the resulting initiatives, rather than processing the data.

Fleet, Aircraft & Engine analysis
This helps to detect performance degradation problems, such as unstimulated ailerons, rudder, protruding spoilers, thrust asymmetry, and their causes. Usually these problems are difficult to detect during standard maintenance (due to a lack of aerodynamic forces), but at the same time often simple to repair. Repairing these deviations can reduce fuel consumption by up to 1.1%. StorkJet’s observations so far show that even with a new fleet, one in every 8 to 10 aircraft has imperfections that cause increased fuel consumption.

APM at LOT after Storkjet AAPM implementation
There is now a unified APM process for the entire fleet – and having that same solution for the entire fleet means no additional costs for developing and maintaining different tools. It means that there is no need for APM software subscriptions and the elimination of APM data transmission costs via ACARS as well as the elimination of source data handling time – it is all automatic now. Furthermore, engineers can now focus on analyzing the results instead of processing the data. 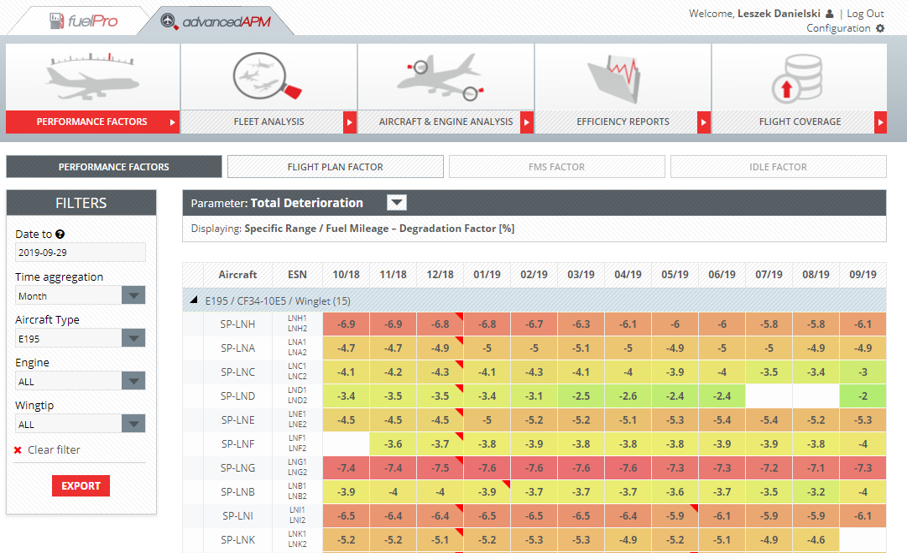 With the large amount of data StorkJet is able to process we can go far beyond classical APM analysis, eg thrust reduction monitoring, down to particular intersection takeoff. 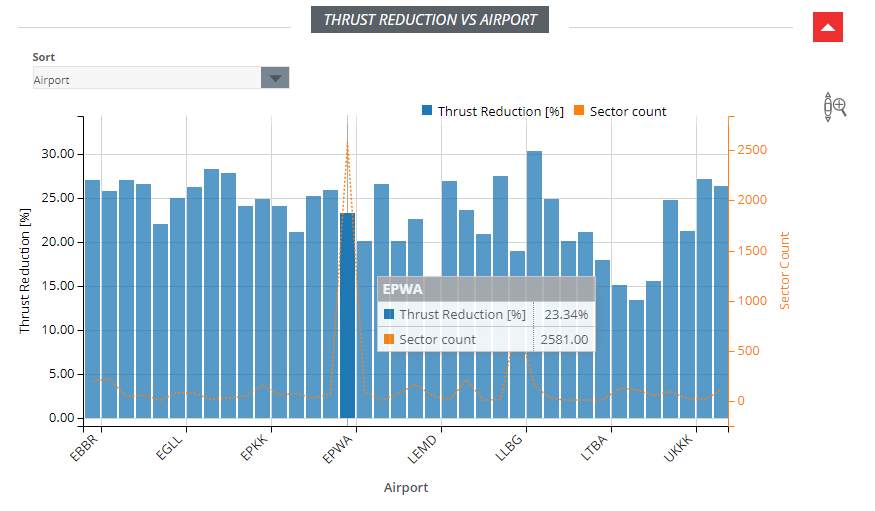 Thanks to Engine analysis module we have been able to identify negative fuel flow effect coming from engine technical issue. 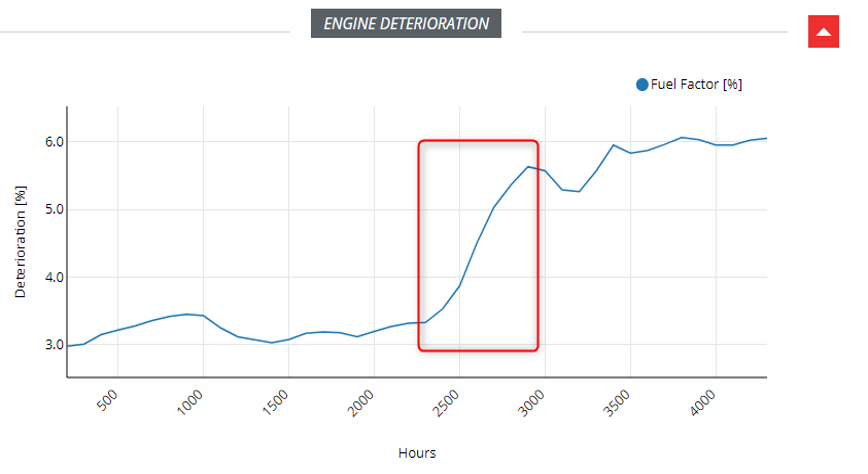 If I were to sum it up in one sentence I would say that, in the overwhelming world of Big Data, StorkJet knows very well how to turn Big Data into small data and let you make use of them.

Leszek Danielski , Flight Operations Engineer, with LOT Polish Airlines since 1990, took part in the fleet transformation from Tupolevs and Ilyushins to Boeings, Embraers and Bombardiers and that was an exciting experience. Since joining LOT, Leszek has dealt with all aspects of flight operations engineering such as takeoff, landing and enroute performance, flight planning, manual and computerized weight and balance including aircraft performance monitoring. He is a member of SAPOE (Society of Aircraft Performance and Operations Engineers, sapoe.org).