WizzAir started a long-term cooperation with StorkJet in 2019 and from that time is facilitated by the most precise and fully automated APM software.

As reported by Jaime Romero Waldhorn – Fuel Efficiency Manager at WizzAir – with AdvancedAPM, the analytical team can focus on data analysis instead of data processing.

Curious about how to improve the automatic APM process? Below you can find the article with real-life examples.

Link to the full release of Aircraft IT Magazine 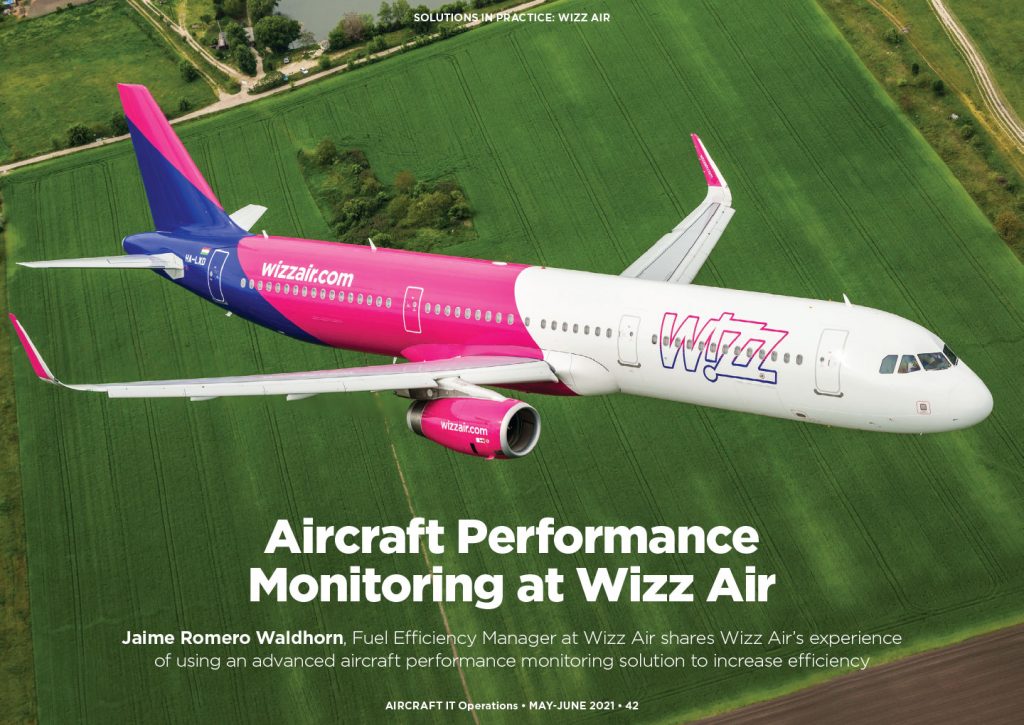 Many fuel efficiency initiatives are dependent on the accuracy of flight planning and Flight Management System predictions. The accuracy of these systems depends on aircraft performance deterioration level which indicates how much actual aircraft fuel consumption differs from its baseline model at any given point in time.  Every aircraft has different in-flight performance. Differences originate mainly from engine deterioration, but also from maintenance quality, installation of performance improvement packages, or just the manufacturer’s production quality. Accurate monitoring and application of performance factors deterioration enable these differences to be turned into emission savings. This
understand how it works, let’s start with some facts. For each aircraft type, manufacturers publish associated performance models. These models play a fundamental role in Flight Planning and Flight Path optimization. They are being used in:

Performance models are built for each given aircraft type. As every aircraft in the fleet burns a different amount of fuel, we need a way to represent the performance of each tail. This is done through the use of Aircraft Performance Monitoring (APM), by adjusting individual aircraft performance models using actual observations. As a result, Flight Planning and FMS predictions are more precise. Increased precision translates directly into emission savings. Regarding OFP fuel figures, savings are also indirect as more accurate fuel figures translate into fewer overburns – fewer flights in which actual fuel burn was higher than planned.
This increases pilots’ trust in the planned fuel figures and thus they tend to take less extra fuel on board. Summing up, safe overburns (underburns) are key in the reduction of the captain’s discretionary fuel. APM output is also used in Aircraft Information Management Systems to support tail assignment. Until 2019 Wizz Air Flight Operations followed a legacy APM process, which required a significant manual workload and in which precision was far from ideal. We spent most of the time preparing and processing the data, with not much time left for analyzing trends or results and the impact they had on our operations.

Another drawback was that the updating of performance factors took place every month or quarter depending on a standard deviation of results. Such lengthy intervals result in fuel penalties related to planning too much fuel until the new performance factor is available (for example the fuel burn of an aircraft might significantly decrease due to an engine change). As a result, in order to cater to cases where large differences in deterioration occurred, there was no other way than to apply a rounding-up policy. Otherwise, aircraft could fly for extended periods with a too-low performance factor. In 2019 Wizz Air established long-term cooperation with StorkJet, which supports airlines in aircraft performance monitoring and fuel efficiency optimization.
Their solution named 'AdvancedAPM’ resolves the issues described above and fits much better into Wizz Air’s vision. With help of Advanced-APM, Wizz Air’s performance monitoring process is now:

Instead of obsolete ACMS reports, AdvancedAPM uses wireless QAR (Quick Access Recorder) data which records ~ 20x more flight data at higher precision and frequency. A proof-of-concept performed on historical data indicated significant improvements in monitoring precision. Increased resolution and level of precision connected with diagnostics data enabled us to more accurately identify what was the root cause of performance deterioration. In some cases, maintenance actions were performed, recovering some aircraft performance. The example below (Figure 1) presents total deterioration (blue line), airframe deterioration (orange line), and both engines’ deterioration (green line) over time.
In September 2019 Wizz Air changed both engines, which resulted in decreasing engine deterioration from 2% to 0.7% and total deterioration from 3.5% to 2.4%. With daily resolution, we can see the change in performance just after the maintenance action.

In another example (Figure 2) we can see that total deterioration (blue line) increased from 2.7% to 3.6%.

Looking into the details, it turned out that the increased degradation was caused by a sudden jump in engine 2 deterioration (Figure 3).

AdvancedAPM also offers a diagnostics module, which is helpful in the independent monitoring of engine performance after a shop visit or other maintenance actions. The example below (Figures 4 and 5) shows one of the PW-1127GA shop visits. The correlation between EGT (Exhaust Gas Temperature) and Engine deterioration is visible.

Such changes are immediately picked up by AdvancedAPM. With automatic alerting, Wizz Air can immediately react to increased degradation and work on corrective actions. The software gives us the possibility to monitor over 60 engine and airframe parameters related to aircraft performance (deflection of ailerons, spoiler, elevator, the divergence of N1 or TAT / CAS, and much more). Wizz Air also applies AdvancedAPM IDLE Factors for accurate computation of the FMS descent profiles. The IDLE factor aims to adjust the FMS performance model such that the actual descent can be performed at IDLE thrust from the Top of the Descent until the final approach. IDLE factors are especially important on descents to low congestion airports.

What is more, StorkJet provided Wizz Air with a study describing Descent Profile Optimization which indicated saving potential and all the correlations that might have an impact on savings. Summing up, actual aircraft performance is the key to flight path optimization, reduction of overburns, and proper fleet assignment. With AdvancedAPM Wizz Air’s analytical team can focus on data analysis instead of data processing. All of that results in fuel savings and reduction of CO2 emissions.

Jaime Romero Waldhorn, Fuel Efficiency Manager at Wizz Air. He has a master’s degree in Traffic and Transport from TU Darmstadt in Germany and over eight years of experience in the airline industry. Since 2018 he has been part of Wizz Air and starting in 2020, he joined the Flight Operations team, being in charge of introducing and monitoring fuel efficiency initiatives

Wizz Air is a European ultra-low-cost (ULC) airline with its head office in Budapest. The airline serves many cities across Europe, as well as some destinations in North Africa and the Middle East. With over 130 aircraft across several types from the Airbus A320 family, it currently serves 170 destinations in 48 countries.

Nowadays, aviation plays a big role in our civilization’s development, enabling us to travel across the world and the fast […]